Pimp preachers, thieving pastors, all they want is money, all preachers are crooked, etc., are clichés that are heard ad nauseam about Christian leadership. While there are many cases of dishonest people in the pulpit–as I have seen examples of that with my own 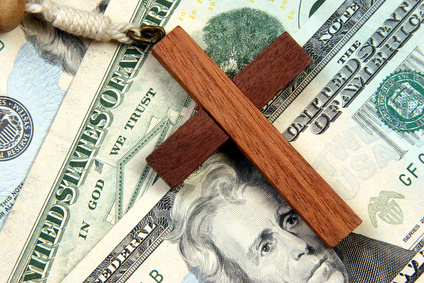 eyes–there is a danger in making blanket statements. One, it damages the credibility of the speaker because it gives the appearance that he/she uses bandwagon appeals to form arguments. There is also the problem of people who sincerely want to engage in the Christian faith yet have to wade through the unfair attacks against them that they are allowing some preacher to steal their money. At best this thing is one, giant, dripping conundrum.

My thoughts on this topic were precipitated by the news that John Gray, pastor of Relentless Church in Greenville, S.C., bought his devoted wife, Aventer Gray, a 200K Lamborghini. His act of love and generosity caused an uproar among those who feel a pastor should not live so lavishly, as well as those who see any sign of prosperity as fodder for accusations of being a pimp preacher. I don’t know John Gray personally or am a follower of his ministry, but I do know that he has legitimate streams of income that do not come from his church. As a result he has the right to enjoy his salary, right?

This is one of those gray areas the scripture addresses in I Corinthians 6:12 where Pau

l states all things are lawful for him but not expedient. Some things are okay to do but is it the best thing or appropriate at the time? For a man to buy his wife a gift is lawful. And I would dare say almost always expedient. However, I am reminded of the words of my former pastor, A.R. Bernard, who noted in a sermon back in the early 2000s the ways in which Christian leaders should navigate certain ares of life because of the scrutiny it will bring. He used the term “quietly expensive” to relay that it is okay to have nice things, but wisdom dictates that in order to avoid accusation leaders should not be so overt with showing their material wealth. It is almost always a trigger for accusers who find no virtue in a preacher doing well for himself.

So what am I saying? I am making the case that because in many ways Christianity has been capitalized and converted into a commodity, those who are truly devoted to their calling and have never stolen a dime in their lives inadvertently become ripe for accusation. They cannot fully enjoy the fruit of their labor because their lives are subliminally controlled by the complaints of people who don’t trust anything related to the word “church”. As a result, Christian leadership is painted with a broad brush by those who rely on clichés and a couple of bad experiences to gauge what pastors are doing en masse. In light of that fact, some leaders may need to make the sacrifice to become “quietly expensive”. In doing so their lifestyles would not become a stumbling block to believers who are not quite mature enough in their walk or spiritual thought processes to understand the value in judging on a case by case basis. But then again, when people have it in their minds that no one behind the pulpit can do anything right, it may not even matter.

And that’s my two hard-earned pennies. Feel free to share your thoughts. You can agree or disagree but I just ask that your argument have a clear basis and be rooted in intelligent examination, not popular thought and emotions. Amen? Amen!

Disclaimer: This blog is not a cyber diary of my life. I like to write about various topics and may insert an overt personal example from time to time to show my connection to the discussion.

2 thoughts on “Pimps or Prosperous?”